78 Why Biomedical Intervention does not work for Autism 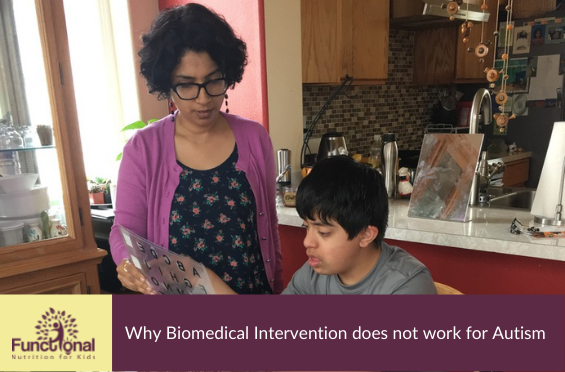 In this episode, I talk about 3 reasons why Biomedical Intervention may not work for your child with Autism or Down Syndrome, and how to find the traps that hold your child back.

And why you might want to give it a fair chance anyway.

If you want to find out more about what gut health actually means and 5 strategies that can help you get started on the path to gut health for your child with Down Syndrome or Autism, check out my free ebook at www.functionalnutritionforkids.com/guthealth

Hi everyone, welcome to functional nutrition and learning for kids. Today we’re going to explore three reasons why people tried biomedical intervention for their kid with autism or Down syndrome and it doesn’t work. I’m your host Vaish chemistry and math teacher, and functional nutrition coach. Okay, so I’m also mom to a point with down syndrome and autism said who happens to be nonspeaking was just a few years ago that I remember feeling so frustrated that I was at my wit’s end at my son’s dysregulation, his fatigue, his lack of motivation, and complete disinterested in anything that I offered. Sit and I have since traveled through 1000s of lessons learned about the gut, the brain, and the extreme importance of assuming intelligence.

I present this podcast functional nutrition and learning for kids in order to bring to you the low and the high-hanging fruit that have changed our lives and can make a huge difference in yours. If you already know you want to pursue Food and Nutrition related approaches to support your child, or yourself with symptoms of ADHD, like focus, hyperactivity, or mood swings, please head over to functionalnutritionforkids.com/roadmap again, that’s www.functionalnutritionforkids.com/roadmap aro ADM AP, enrollment in this course that I call roadmap to attention and regulation ends on Wednesday, October 13, at 11pm PST. So you’re a parent who has tried so-called biomed intervention or biomedical intervention for your child with autism, and things haven’t turned out the way you desired. Or you’re a parent who thinks this is alternative fluff.

Today we’re going to talk about three reasons why we don’t see transformational healing in some kids that go through biomed. Now, technically, biomed should be called functional medicine these days. Now, if you’re wondering what that means, according to my teacher, Andrea Nakayama functional medicine, is the practice of healthcare that focuses on restoring the optimum function of the body and its organ systems.

It does so by recognizing the relationships between all body systems, along with the environmental factors and exposures that impact them. And by seeing the individual as a whole. In other words, your functional practitioner recognizes constipation. To put it famously is not a middle x deficiency, and maybe a symptom of gut inflammation.

This gut inflammation itself may be because of the food that your child eats, or it may be due to a traumatic brain injury or both. It may be due to compromise the dysfunctional immune system, which itself may be due to a long-lasting fungal infection, perhaps, which could be because of compromised digestion again, talk about a vicious cycle right? Which comes first, do they all come together, your doctor may choose to focus on gut health first, since gut health. And when we say cartel, we’re talking about digestion, inflammation, gut infection, and so on. All of this comes under the category of gut health, such a generic term right?

When we say gut health, it often is so generic that it means nothing to most people other than eating probiotics. It’s an extremely vast area. biomedical intervention for autism traditionally revolves around major root causes of discomfort and dysfunction for the child. These could be gut issues, mitochondrial dysfunction, infection, and detoxification. All of these are important when done in the right order, and when including the child in the journey, in other words, when done with your child, and not to your child.

The research says that 40 to 70%. Now the number estimates vary according to the paper I’ve read, but 40 to 70% of kids with autism diagnoses have gi gastrointestinal complaints, again, commonly called gut issues. These can range from constipation, reflux, bloating, diarrhea, gut dysbiosis. In other words, overgrowth of bad bugs or pathogenic bacteria in our digestive tract, right. And this is at least twice the number of neurotypical kids that present with gi symptoms. I present this data as an argument to working on gut health for all kids. I know this is about when biomed doesn’t work. I’m actually trying to make the argument that it can be necessary.

There is an increasing Bank of studies that are showing that diets that remove inflammatory foods like gluten and dairy, or diet setting reduce the refined carbohydrate burden that like sad or ketogenic can also help reduce autism-associated symptoms like Maybe it could help in reducing gi symptoms and improvement in behavior.

Now, why then do some children not show improvement when they’re in a Biomed protocol? I know a number of parents have stopped this protocol midway because they saw no changes and the protocol level following was either too expensive or too hard to follow. So we’re going to review three such pitfalls of the Biomed protocol, and why it may not work for your child.

Right? Okay, number one, you go to a diet or another intervention before or without balancing blood sugar. Diet is important, but often with the fixation on a gluten-free and dairy-free diet. But I’ve often seen as a replacement of gluten with equally or more refined flours like tapioca starch, rice flour, with various gums to replace the gluten and returns of added sugar, for some reason to replace the taste, I suppose, or to compensate for the taste somehow.

A gluten-free diet is actually more blood sugar disrupting because of the extensive matrix of refined carbs and gums used to displace and replace gluten. Therefore, if you’re replacing gluten, which would be Whole Foods, we I generally recommend sourcing from traditions that don’t use a ton of gluten for recipes. I’m South Indian, and I love South Indian diets because it’s very naturally gluten-free for the most part. And but even there, you want to keep it whole food-focused.

For example, using keen wine instead of white rice is a very unpopular, but extremely effective blood sugar-supporting swap. Okay, second trap. The second trap is that you’re not 100% gluten-free, right? I know it’s counterintuitive when you consider the first point I said, Don’t overdo the gluten-free substitutes. But here’s a personal statistic. It’s not researched, it’s just my experience.

Every autistic child that I’ve seen has successfully overcome dysregulation long-term. And not that I say overcome dysregulation. I’m not talking about kids that are naturally not dysregulated. From the beginning. Every child that I’ve seen that is overcome, has used dietary approaches, and I’d been 100% has been or had been 100% gluten-free for most of their lives. Many of them experienced a return in dysregulation or aggression or spiciness or hyperactivity when gluten was reintroduced, and it takes time for these symptoms to come.

So it’s not an immediate correlation or causation that you can extrapolate. And usually, it goes beyond a gluten-free diet or Whole Foods nourishing diet that is effective. Okay. Now, what about the third trap? This trap is huge. I have mentioned this many times, sometimes there are some neurological issues that either cannot be fixed or should not be fixed.

Okay, this is where we’re talking about neurodiversity. Not everything needs fixing. Consider whether going Biomed you are performing Biomed on your child, or whether this is a respectful dance. Of course, as a parent, it is our job to set boundaries and to feed our kids what we think is best for them. But when done with a constant refrain of let me fix my child, this will not work. Breaking the will and self-esteem of a child cannot and will not result in growth. Whether this is repetitive behavioral therapy for 40 hours a week, or whether it’s using a technique to fix within quotes a child, right.

Now that you know these traps, you can stay out of them. And as you stay out of them, you can drop gut health, we are meant to heal the gut to live and digest and eat comfortably. And to celebrate neurodiversity. All of these right? It’s not one or the other. In my course roadmap to attention and regulation, which I love calling roles. I think of taking the person through full focus from food through respect into regulation and using science to find stability.

You can join me at www.functionalnutritionforkids.com/roadmap. doors closed October 13. And that is it for now. I hope you found the pitfall that was bothering you and you find a way to get through the pitfall and work through Biomed because it can be an extremely effective source of reducing discomfort in China. Okay, see you next week on functional nutrition and learning for kids. Until then I’m your host Vaish bye