49 Non-linear Education: the most important strategy to help your child learn NOW 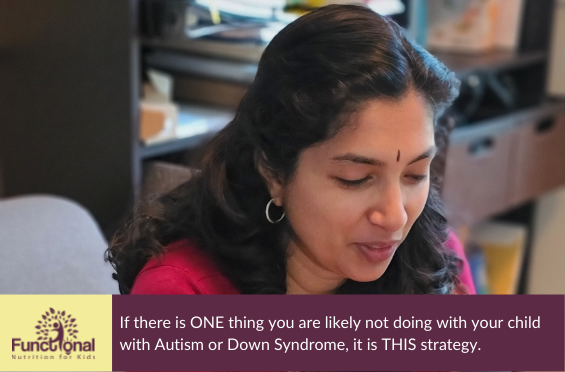 NOTE: THE FREEBIE ASSOCIATED WITH THIS PODCAST IS NOW AT THIS LINK:

If there is ONE thing you are likely not doing with your child with Autism or Down Syndrome, it is THIS strategy. Doing this will make the difference from teaching repeated ABCs and moving to writing poetry and studying advanced literature. I call this non-linear education!

Hello, friend, and welcome to the 49th episode of functional nutrition and learning for kids. I’m your host Vaish. Now, this is a special episode where I’m introducing a new format in the form of a short q&a. I’ve recently been working on answering a question that comes up more often than any other question in my practice, and that is, how can I help my child focus? Another question that actually almost comes up equally is how can I help my child learn? Now, first of all, I have a six-step process that will help any child learn. And this is in the form of an ebook now and it’s available for free on this link. So you can go to www.functionalnutritionforkids.com/learning .

Now before we move on to discuss this question, I want to remind you friend that the next week is the big 15 will be the 50th episode. And this means a special guest. And that guest is the person that I credit with shifting my life and my son’s life. Her name is Salma Mukhopadhyay and she is the founder of RPM or Rapid Prompting Method.

It’s a very exciting podcast. So do not forget to tune in this Friday. Okay, coming back to the question, how can you, dear friend help your child learn? Now this question is often from parents of kids that have been diagnosed with ADHD, sometimes autism, or very often Down syndrome. Now I’m going to share the most important factor that can help your child learn, especially if they have Down syndrome or autism. And I did say the most important factor, this tidbit. Now, honestly, calling it a tidbit is a huge disservice because actually, this is the single most overlooked strategy and the most powerful technique for building cognition. This is called nonlinear education. I call this nonlinear education.

If you’ve been following me on Instagram or Facebook, you might have seen that I use this term a lot. If you’ve heard any of the podcasts that have been a guest on perhaps if you’ve been hearing my TEDx talk, I’ve used some version of this a lot. Now, what is nonlinear education? And how can this help your child learn? Obviously, you’re here for that right. So let us start with some facts. If your child has Down syndrome or autism, chances are that they have either limited communication, speech difficulties, or lack of communication. Often the presence of conventional AAC is augmentative assistive communication.

In other words, often that means an iPad, it doesn’t have to but today, it seems to mean an iPad and an app. It doesn’t help many kids conventionally, okay. There are other forms that help, for example, RPM, write a letter board. What happens in this scenario is what I call repetitive education.

Yes, they understand that two plus two is four, 5 years ago, they understood this okay, that yes, you didn’t have to spend the last eight years teaching them colors. And that yes, they are bored out of their minds and just do not have the ability to tell you so if you know my personal story, you know that this was the story of my son for over six years of his life until we discovered nonlinear education and an academic technique, RPM Rapid Prompting Method. After this, my son graduated into easy age-appropriate education and is now a published author and a port.

Next week in the big 50th episode of this podcast, I have the guest that created RPM, so please, please tune in I’m so excited for you. If you haven’t discovered RPM yet to hear so mattock. Now in my program of nonlinear education, we don’t wait for proof of learning to proceed to the next step. This is a hugely important idea in scenarios where children have communication issues, and this includes speech apraxia. In fact, instead of testing, we use boredom as an indicator when a child looks bored. We move to the next level if you’ve been teaching numbers if you had been like me, teaching numbers for I don’t know how long and the child is born, teach them addition.

This is still a linear stepper moving in a pattern. But in truth, even this progress doesn’t have to be linear. In math that often is, but if a child is bored with colors, teach them about rockets. And if they’re bored with rockets teach them about escape velocity. This universe doesn’t have a lack of information. There is abundance in the worlds of science, math, and art all around us. And this information is accessible. In truth, anything, okay? Really, anything from a rocket launch to the deepest atomic structures can be narrated as a story to a five-year-old, with some complexity to a nine-year-old, maybe with more detail to a 14-year-old, and with the same awe and wonder to a 30-year-old.

One of the most important concepts to know is that the brain does not learn best in a linear fashion. In fact, in the book, Mozart’s brain and the fighter pilot, that’s the title of the book. Neuropsychiatrist Richard rests access that within our brain events exist in a nonlinear, non-chronological pattern. And that to get rid of this tendency to neatly compartmentalize both events, memories and learning, this is very advantageous to our growth, our brain growth. Now the fate of a child with Down syndrome is not to be relegated to the ABCs and the one-two threes.

Why can’t it be to learn the insides of an atom to learn the jiggles of the universe from Nobel laureate physicist Richard Feynman, as my son said, is doing right now. Feynman left easily understandable Lectures on Physics for all of us. The skill lies not with the child with autism or with Down syndrome.

The skill to learn should lie with us as parents as educators. When I say skill I have I actually even mean the responsibility, but the skill lies with you with me. Can you bring NASA and the Mars Rover into a story that you can tell anybody? And I leave you with that thought. Thank you for listening.