21 Myelination in Autism: A Summary 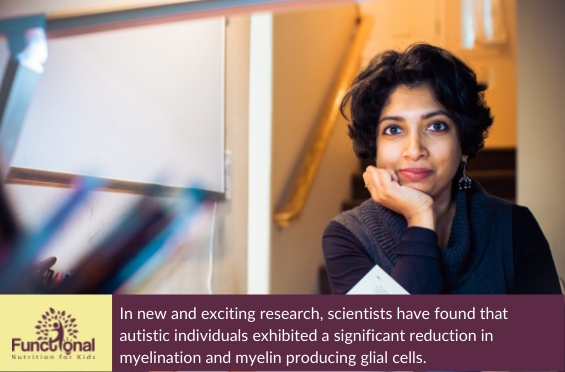 In new and exciting research, scientists have found that autistic individuals exhibited a significant reduction in myelination and myelin-producing glial cells. Let us review what we know about myelination and how we can RE-myelinate.

Sign up Here for Vaish’s weekly Podcast to receive a weekly email with podcast-related information: Functional Nutrition and Learning for Kids has 20 mins of power-packed content.

Everyone, welcome to functional nutritional learning for kids. Thanks for joining me again this Thursday. Before we get started on this special episode where we want to talk about autism, a couple of requests from if there are a few episodes that you’d like or if you’ve been enjoying this podcast for a while, I would be so grateful if you could go to iTunes and drop a review.

This makes it easier for other people to find my podcast. And one of the reasons that I started this podcast in the first place is to get information about nutritional interventions for autism, there is so much to be done in the aspect of learning what we call functional learning, and this is such a synergistic effect, as opposed to models of autism that are completely medical or social in nature.

I feel that there is so much that needs to happen and leered along with each other so we can support our children better. Now coming back to this episode, today, we’re going to talk about myelin and autism. So now the very cool thing is that we already have a couple of episodes about myelin and autism. These are episodes 16 and 17. And especially in Episode 17, we focus on myelin learning and nutrition.

Now, in this episode, I had speculated that autism Down syndrome and cerebral palsy, and other labels that are often associated with lower cognition, and I say this within quotes are actually myelination issues. And at that point, I had said in that podcast, I really don’t have any proof to this point that autism is a myelination disorder. And what is so surprising is that in the last week, there has been new and exciting research about the role of myelination in autism.

So this study, which is taken everybody by surprise was published in Nature Neuroscience, and it talks about how both mouse models and humans whose brains were analyzed exhibited a significant lack of myelination in their brains, and also a decrease in the number of oligodendrocytes, which are the glial cells in the brain that are responsible for myelin production.

Now, this podcast is a summary podcast, what’s going on? And what can you do about so what’s going on is that we know there is reduced myelination, and the reduced number of cells significantly reduced the number of cells that create the myelin in the first place. So that begs the question, what is myelin? myelin is in fact an insulating fatty sheath that surrounds axons or we can call this the wiring which carries electrical signals from neuron cell bodies, that is the axons carry electrical signals. Now insulation is important for connectivity. And one of the things I mentioned in the previous podcast is that if you have heard the term white matter in the brain, this refers to myelinated axons because they are white.

Everything after this comes down to a summary of what can we do to increase myelination. What can we do to increase the number of oligodendrocytes? Now the first thing is that myelin sheath seems to increase with practice. This is what is known as muscle memory often but it is obviously not there’s no memory in the muscles, it is generally an increase in the fatty sheets and increases in new in Milan, I’m sorry, that happens with an increase in practice. And this is so great. So we need to practice our motor skills. But we also need to practice the learning that we want to improve our skills in.

We need myelin for better connectivity. Why are we doing all this? Why is this myelination? important? Everything from mood to focus to learning to behavior to a lot of things that are often mistaken for cognition are dependent on myelination.

There is so it just got to PubMed and put in more than myelin or behavior in myelin or even cognition and myelin. Now, every time I say cognition, you might notice that I put that word within quotes why do I say this? Why do I say the things that we call cognition? The reason is that we have abundant proof that there are many children with different labels, including autism, Down syndrome, and cerebral palsy.

I would venture to say, in my opinion, that all children exhibit high levels of cognition, we absolutely have no way of assessing a child’s true cognitive ability when their motor skills are impaired when their ability to express their cognition to the external world is impaired. So I am never going to say that myelin is going to impact cognition because honestly, yes, I know we have myelination issues, but I have yet to come across a child that has low cognition. Low motor, sure, low focus, absolutely. behavioral issues, mood disorders, yes, but low cognition. I don’t think so. Okay, how else can we increase myelin? So what are the nutritional things that we can bring in? So we’ve talked about practice so far, we’ve only talked about practice, right? vitamin D.

A lot of research connects vitamin D to generic oligodendrocytes and re-myelination. Same thing for vitamin C, and good fats. And if you want to know the difference between good fats and bad fats go back to episode number 17. Okay, omega threes exercise we talked about this repetition practice over and over right? Smart repetition but very repetition, antioxidants support mitochondria because mitochondrial function seems to be closely related to myelination. reduction of inflammation.

Dietary polyphenols from an abundance of colors from fruits and vegetables, olive oil, very high in polyphenols to even cannabinoids and I’m talking about CBD oil. There’s research to show that these can be very beneficial and re myelination. Reducing mercury exposure because mercury exposure is related to there seems to be triggers related to multiple sclerosis and multiple sclerosis is an autoimmune disorder where the myelin sheath is attacked, removing inflammatory foods. Inflammation neuroinflammation can affect the number of oligodendrocytes.

Gut inflammation is very closely correlated with brain inflammation. So, therefore, removing inflammatory foods like gluten are proven to trigger autoimmunity. Okay, as much as we would like to call a gluten-free diet a fad diet, there is actually data that correlate consumption with increased risk of autoimmunity. Are there drugs that support myelination? Yes, there seem to be several that are used in multiple sclerosis. And I actually suspect that multiple sclerosis research may prove very helpful in the future in considering nutritional support for autism in the future.

Now, if you had to summarize you would say reduce inflammation, eat the rainbow and assume intelligence. So what does human intelligence have to do with this is that first of all, if you’re hoping for any improvement in any area for your child, you really have to assume intelligence because that brings with it and with a component of respect, but more practically, remember that there’s a lot of information on how to practice repeated practice helps increase the myelin sheath?

But just random repeated practice of the ABCs are the numbers in a 13-year-old isn’t really helpful to you, okay, we almost don’t want those networks to be reinforced, right? Assuming intelligence helps and refinement of input, refinement of input. age-appropriate input helps the child develop connections in their brain appropriate to what they are interested in and appropriate to what is needed at that age for them. And without going into too much detail about any of these interventions that we’ve talked about.

I think the common thread is very clear if we hope to increase the amount of myelination if we hope to remind and increase the number of oligodendrocytes, it’s very important that we attack three fronts, inflammation, movement, and respect. I’m given that that is what I’m hoping that everybody centers their practice on this is just fantastic.

I hope to see you again next Thursday. Thank you so much for tuning into this special episode of functional nutrition and learning for kids. If you enjoyed this episode, you would consider sharing this with five of your friends, three of your friends or even one of your friends that might be interested and this will benefit. I would be super grateful. If you have a comment or further suggestions for episodes drop in facebook.com/functionalnutritionforkids. The music at the beginning and the end is by my nine-year-old daughter Maitri Gosh. Thanks again for listening. We’ll see you next Thursday. Bye